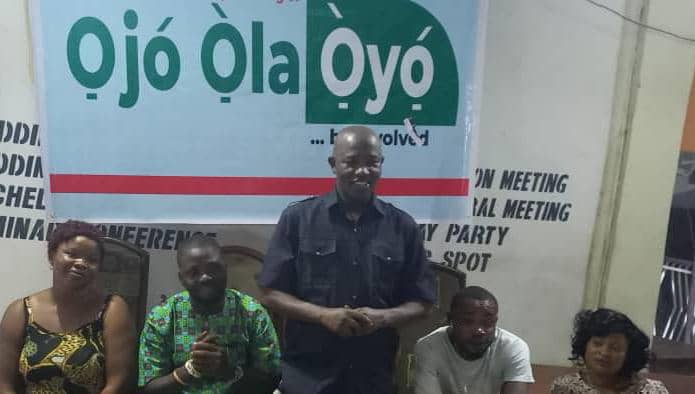 Founder of an Oyo State based youth group, Ojo Ola Oyo, Alhaji  Kehinde Olaosebikan on Thursday, declared that the social media generated euphoria surrounding the ambition of  the Presidential candidate of Labour Party Mr. Peter Obi will disappear in no time.

The APC Chieftain stated  this in Ibadan while speaking with journalists on the sidelines of the extraordinary meeting of the group held at Mount Pleasant Hotel, Podo.

According to the Founder of Ojo Ola Oyo, such flashes were not new to the political, social and economic environments of Nigeria and that they usually disappeared as they came, “because they were never based on anything concrete but on mere fantasy, illusion and grandstanding”.

” This is not the first time we are witnessing such fleeting euphoria.

We had seen pastor politicians who gained temporary traction because of declaration that God asked them to contest for president; in business”, he said.

Alhaji Olaosebikan added, ” we had seen flashes in form of finance houses promising incredible interests; in real estate, we had seen flashes of mortgage firms making impossible offers during the time of ‘everybody come inside’; in medicine, we had witnessed passing euphoria too, where marketers promoted a drug for the cure of all ailments that eventually cured nothing; all hurtled because they were based on fantasies” .

On his now popular projection that Asiwaju Bola Ahmed Tinubu would be the next President of Nigeria considering the seeming popularity of Peter Obi, Alhaji Olaosebikan said from his experience with the Nigerian youths they would rather act now based on realities and proven records of achievements having suffered so much in the hands of politicians who had promised them heaven on earth but eventually made life more hellish for them.

“From my experience with the youths today including those you are seeing here now, they can be said to be wiser now and more realistic. They are not ready to take promises. They want to see what you have done concretely in the past and assess you mainly on such accomplishments and feats.

“So, I can tell you they are ready and more inclined to voting for the candidate that is known to have ‘developed boys to men’ as the former governor of Akwa Ibom State, Chief Godswill Akpabio described the Presidential Candidate of the All Progressives Party, APC, Asiwaju Bola Ahmed Tinubu; the candidate that has developed and mentored both young and old Nigerians to become governors, ministers, vice presidents and president.

Speaking further, he stressed, ” a leader and candidate that has brought prosperity to his state by raising IGR from less than a billion Naira to N15b within 8 years; a candidate that has brought marked growth and stability to the political and social being of his state, making Lagos the model for development in all aspects in Nigeria today. This is someone the youth can look up to, in whom they see hope and greater Nigeria ahead.”

Alhaji Olaosebikan pointed out  that the candidate of the All Progressives Congress, Asiwaju Bola Tinubu has demonstrated to be the best so far amongst all the former governors and leaders in Nigeria, particularly those contesting the presidential race with him in all aspects of life, adding, “Asiwaju Bola Tinubu has established himself as the most functional politician, leader, administrator, nation builder in the country today.”

“For me, Nigerians, both youths and the old, we should be practical in the choice of our next president and consider capacity, competence, experience and antecedents and not any primordial sentiments or promises based on misapprehension.”

The APC Chieftain then tasked the youths to use the cyber space more positively for their businesses and towards the growth and unity of Nigeria as well as for the promotion of the person with the best track records of making life better for the masses of this country.

In his welcome address, the President of Ojo Ola Oyo, Mr. Wale Adesope pledged the total commitment of the group to the APC presidential candidate, Asiwaju Bola Ahmed Tinubu disclosing that it would when campaign properstarts, embark on “house to house, cell to cell, media to media, platform to form” campaign to fully mobilize the youths for Asiwaju Bola Ahmed Tinubu, because, “ We are very sure that he will do well for the youths as the President of our dear country”, said Adesope.

He was full of praise for the Minister of Youth and Sports Development, Chief Sunday Dare for the numerous life changing innovative programs being implemented by the ministry adding that the National Youth Investment Fund (NYIF) was the best thing to have happened to Nigerian youth in terms of real empowerment economically, socially and politically.

Mr Adesope urged the beneficiaries of the loan scheme being given to youths between the ages of 18 and 35 to make good use of the fund for the improvement of their lives and the society as a whole.