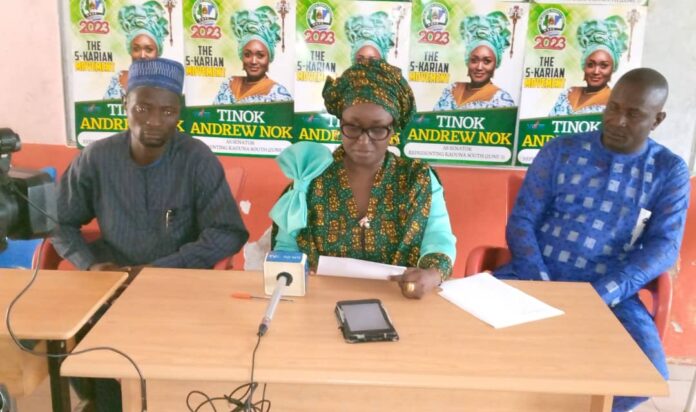 A female Senatorial aspirant for Kaduna South Senatorial district on the platform of New Nigeria Peoples Party (NNPP), Tinok Andrew Nok has said there was no primary for the position she was contesting, stressing that she was disenfranchised as a woman even after purchasing the form as the sole aspirant.

Addressing a press conference in Kaduna on Tuesday, she vented  anger over what transpired, narrating that the date initially fixed for her affirmation was all of a sudden shifted only for another person’s name to be presented from no where.

In her address, she said, “It is with deep and saddened heart that I have to draw the attention of the National leadership of the New Nigeria Peoples Party (NNPP) and the general public on the recently concluded primaries election that took place on the 5th of June, 2022, in Kafanchan Kaduna State.

“I regret to state in strong terms that there was no election but selection, there was brazen intimidation of delegates, arm twisting them to vote the candidate of choice for the party.The party officials were seen with delegates and, local government chairmen with cash to settle them.

“A party official confidentially told an ally of mine without his knowledge of our relationship that there was a directive from the state to ensure that the result is in their favour.

“Delegates who voted in my favour were sacked from the party. It is clear that a few undesirable elements within the state party are bent on soiling the image of our great party, whose goodwill His Excellency Engr.Mohammed Rabiu Kwankwaso has worked acciduously to build.

“I call on the National Party Leader to call these people to order not for personal interest, but in the interest of the party as a whole. I hope that his excellency will exercise his authority and apply wisdom as he calls to order the irregularities going on within the party especially at the state level.

“At this point it is expedient to state that when no Southern Kaduna elite saw nothing good about the party, I did. I believed in its potentials especially because I was in sync with the ideological views of the National Party Leader who believes in bettering the lives of the common man.

“I saw NNPP as a platform that would predicate fairness, justice and equity. Unfortunately to my utter dismay, I was disenfranchised from my rights and will clearly state I was marginalized first because I am a woman then a youth with no deep pockets.

“It is rather unfortunate that these fundamental bases upon which my inspiration was built, were the very foundations that were  attacked. In a time where advanced people judge leaders by their competencies to diversify economy, grow GDP, increase human development index and per capita income, some group of people who do not mean well for the people dismissed my candidature based on the aforementioned”.

She argued that “Southern Kaduna was on the verge of making a sophisticated political statement as well as demonetise politics, include women and youth in government and entrust leadership to the visionary common man. Instead of mentoring and encouraging this vibrant and courageous feat, it is being thwarted even before it saw the light of day” adding that it is her fundamental right first as a human being then as a woman to participate in governance.

“Thus, marginalization of women and youth who make up the most population is highly condemnable in all ramification and I reject it absolutely.It is evident that there is a structural plan to relegate me to the margin. I must reiterate that I refuse for my dignity and worth to  be devalued.

“I shall not be pushed to the margin by people who make the political environment unnecessarily unfriendly simply because they see elective positions as huge financial investment, since a victory in the electoral process is a surety to poverty alleviation.Evidently, I make bold to say that the Kaduna State party is not interested in winning elections by refusing the will of the people to prevail and subsequent emergence of a sellable candidate as a flag bearer.

“The party NNPP cannot claim to be a democratic party if there is no visible evidence in political terms. The silence of the party before and after the unfortunate primaries which I shall still repeat was a sham, is rude, disrespectful and severely malicious.

“After investing my time and hard earned resources into the party and giving it a face lift in Southern Kaduna, this is definitely an unkind and thoughtless way to show gratitude”.

She further said that NNPP has come with great acceptance but must rise to the occasion to project and protect its values so that the wild fire it has ignited in the hearts of its followers is not doused by -ill meaning few who are void of ideology.