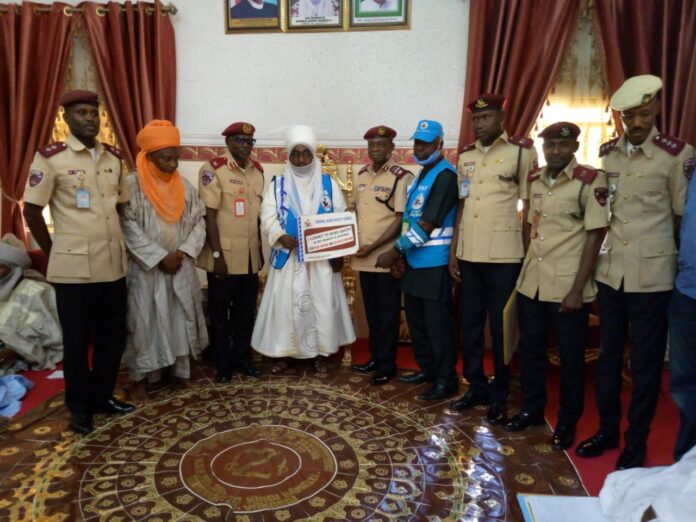 The Federal Road Safety Corps (FRSC) has said that over 600 people lost their lives due to road traffic accidents between Kaduna/Zaria/Kano highway within its Zone 1 Command between January and June 2022.

The Assistant Corps Marshal in charge of the zone, Dr. Godwin Omiko  disclosed this during an advocacy visit to Malam Ahmed Bamalli, Emir of Zazzau, on Wednesday in Zaria.

Our correspondent reports that Zone 1 comprises of Kano, Katsina, Kaduna and Jigawa states.

Omiko said that additional 2,310 victims of the accidents  sustained various degrees of born injuries within the time under review.

He said by June 2021, the route recorded 350 deaths but the figures  doubled this year, when the condition of the road has significantly improved, hence the advocacy to the emir.

The zonal commandant, therefore, implored the royal father to intervene to address the challenge.

“Your intervention is very imperative considering the rising cases of road crashes on this axis, we held series of sensitization programs at motor parks and other places but that has not yielded the desired results.

Omiko attributed the accidents to excessive speed, dangerous overtaking, reckless driving, driving under the influence of drugs and blatant disregard to road traffic regulations by motorists.

He particularly expressed worries over the high rate of recklessness exhibited by Sharon and Bus driver on Kaduna-Zaria and Kano routes.

” Your highness they have turned the rehabilitated portion of the road to be a racing tracks,” he said.

The Zonal Commander, therefore, decorated the Royal Father with a title of Honorary Special Marshal.

In his remarks, Malam Ahmed Bamalli lamented over the rising death due to road accident, and urges the commission not to relent on its sensitization and advocacy programs.

The emir assured the commission that the Zazzau Emirate Council would explore its various channels of communication to reach out to road transport workers with a view tame the challenge.

In his contribution during an interaction with FRSC, Alhaji Inuwa Aminu, Wazirin Zazzau urged the commission to reclaim and restore its confidence.

The Senior Council member said some officials of the commission use to compromise the excess by some motorists.