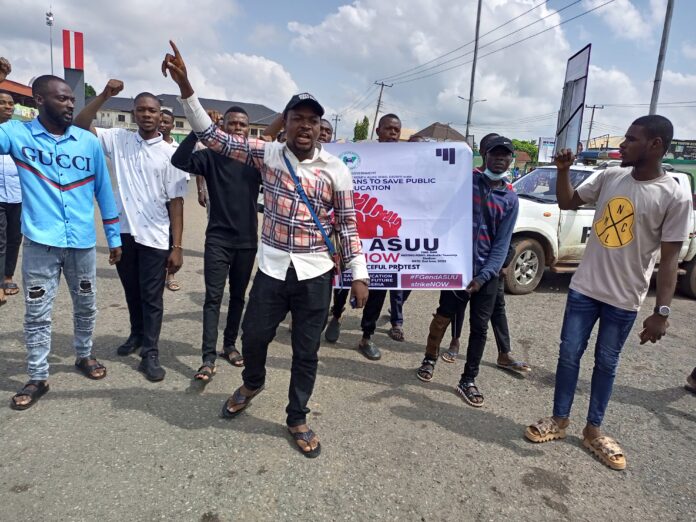 The students demonstration  took place at the Pa-Ngele Oruta Township Stadium where students of the institution and other NANS leaders gathered to express their displeasure over the lingering strike.

According to the SUG President of AE-FUNAI, Comrade Jerry Okafor, most students are on the streets engaging in all manners of social vices, calling on Federal Government of Nigeria to take urgent steps to resolve the matter before it will degenerate.

He lamented that billions of Naira was spent in the just concluded primaries while what ASUU demands is not up to such amount.

“They have abandoned the students, the future leaders of this country because of primary election and don’t even have any concern about our wellbeing because most of their children are studying outside the country getting sound and standard education while we are here gallivanting on the streets.

“Some students are already indulging in all forms of social vices because of ASUU strike.

“We are urging  the Federal Government to settle ASUU.They spent billions during the just concluded primary election and what ASUU is demanding for is not up to that amount.The Federal Government should do the needful because we students are not happy.We are giving them two weeks ultimatum to resolve the strike or we storm the entire streets of this state.”

On his part, the chairman, Joint Campus Council (JCC) Ebonyi State Axis, Comrade Oke John Kingsley said that  students are not happy about the way ASUU strike is being handled by Federal Government, adding that they are tired of staying at home.

He said some students are now fully into prostitution, unwanted pregnancies, early marriages, while others are into yahoo because of the inability of government to resolve the strike.

He therefore, urged the Federal Government to listen to the demands of ASUU to provide facilities that will make the school environment conducive for students.

“We are no longer happy sitting at home, we are tired. Because of this ASUU strike, some students are now into prostitution; some are getting unwanted pregnancy, early marriage.

“Students are joining yahoo and illegal activities on the streets while security agencies are busy arresting them. We are tired of going to police station.

“As a matter of urgency, the Federal Government should negotiate with ASUU.If there is no good facilities in the school,we won’t have a conducive environment for learning.

Also speaking, the Coordinator, NANS Zone F. South East Zone, Comrade Ibeabuchi Moses and the immediate past Cordinator of NANS, South East/South-South Zone, Comrade Olisa Nwuruku Alfred all  pointed out  that the nationwide strike has caused more harm than good, noting that the peaceful demonstration is just to express their grievances over the ASUU strike lamenting that students are at home while they are  about to conduct general election.

They therefore,  pleaded with Federal Government to meet with the demands of ASUU to enable students go back to school  to avoid being used as thugs during the election.

“As you can see, students are gathered from different institutions of the state to express our grievances students have been at home and they are about to conduct election.

“We are pleading with the government of the Federation to call ASUU to order and meet their demands so that we can go back to school because if students are in school,the won’t have time for election thuggery and other form of violence.

“We are not happy, and we calling on all authorities including the governors to rise up and meet the demand of ASUU.”

Responding, the Special Assistant to the the Governor on Students Affairs, Hon. Gideon Onwe urged the students to continue to comport themselves and remain peaceful as Federal Government is already looking into the matter explaining that South East Governors Forum under the leadership of Gov Umahi has also taken the matter to Federal Executive Council to ensure it is resolved very soon.

“I  just want to say few things and you people should continue to comport yourself about this ASUU strike that has shutdown the tertiary institutions in Nigeria .ASUU strike is also a big concern not just to students but to major key players.

“The governor of Ebonyi State who we know is a father is also looking into the welfare of students. We have been doing our  best, meeting with stakeholders to come together and look into the ASUU strike.

“Recently, our governor took this matter to National Executive Council where the discussed the possible way of resolving this matter.

“While you continue to be patient, give them a little time to resolve this Matter.We have really waisted time at home and won’t be good if we did not resolve this issue before going back to class room.

“The Federal Government and ASUU are working assiduously to settle it.The leadership of governors forum are also on top of the matter.

“We need to settle this issue permanently because students have suffered in this country.

“I want you all to be law abiding throughout this period,” he charged.