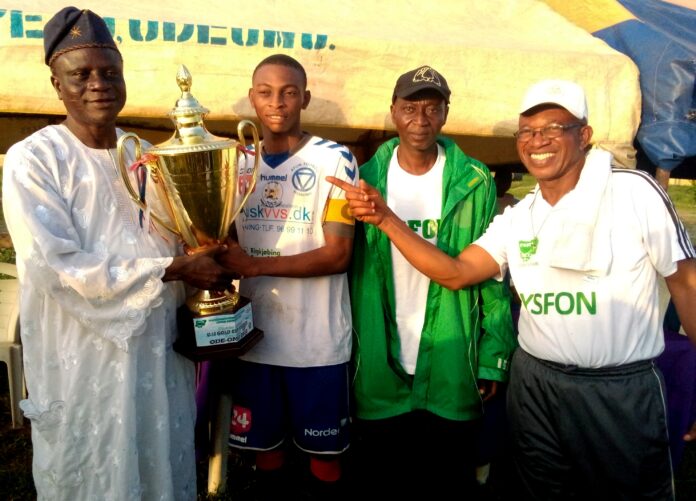 Allen-Taylor Football Academy that represented Ogun State at the recently concluded Under-16 Gold Cup Soccer Tournament organized by Southwest zone of Youth Sports Federation of Nigeria (YSFON) has emerged winner after defeating the host state, Osun in the final on Saturday.

Six states within the southwest geo-political zone took part in the maiden tournament tagged Ode-Omu 2022 where the Ogun boy walloped Osun by two goals to nil during the final match played inside the National Youth Camp in Ode-Omu, Osun State.

The Chairman of Ogun State YSFON, Alhaji Waheed Kashimaawo Lawal while receiving the victorious boys in Abeokuta expressed joy over the feat achieved by the Ogun boys, for winning the maiden tournament by un-beating and commending the technical crew for their good conduct during the tournament.

“I’m happy with the feats achieved by the Ogun boys because it is a testimony to the efforts we’re putting in place to develop grassroots football in Ogun State. I want to also state that their efforts will not go unrewarded. Most of them are students and we’re going to support their educations”, Lawal, who doubles as the President of Abeokuta All Stars FC noted.

Also reacting to the victory, the proprietor of the academy, Hon Allen-Taylor Olufemi was also full of praises to his boys for making the state proud; saying the objective behind the establishment of the football academy is to be the best in the state and to help the youths realize their dream of making living through the round leather game.

Allen-Taylor who had once represented Abeokuta South Local Government Area at the Ogun State House of Assembly thumped the leadership of YSFON at the South/West for inventing new tournaments with aim to engage and harness talents from the Yoruba speaking states.