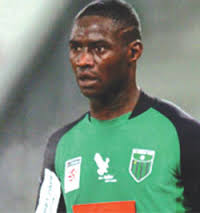 Former Super Eagles International, Benedict Akwuegbu has declared intention to run for the Presidency of the Nigeria Football Federation (NFF) scheduled to hold later in the year.

The former U–17 and U-23 player in a chat with newsmen via WhatsApp, said his desire to be the NFF President is to qualify the country for World Cup and to win it as the first African country.

Akwuegbu who won the Africa Nations Cup for Nigeria and has played in Germany, Greece and Austria, said his focus will be on grassroots football development,  so that the country can have developmental programmes.

” Nigeria is a top football nation and if elected, I hope to improve on this so that the country can be ranked among the Football nations in the world if elected as the NFF President”, he said.

Akwuegbu who played for Gratkorn Football, Austria added,  “I have the template to to run and revamp the national league and intend it at all levels and I also want to qualify the country for the World Cup and win it for the the first time “

” This is achievable with the support all major stakeholders but the truth is that I have all the wherewithal to run the the NFF and make it enviable to all .I played the game to managerial position and as such will be ready to be the president of the federation”

The former technical director, Mighty Jets Football Club, stressed, ” I am ready to work with all stakeholders in football in the country in order make Nigeria football great and be reckoned with not only on the continent but the world at large.

NPFL: How Edidiong Ezekiel Was Pillars Nightmare On Match Day 34

Give Us A Football Club, Anambra SWAN Tells Soludo